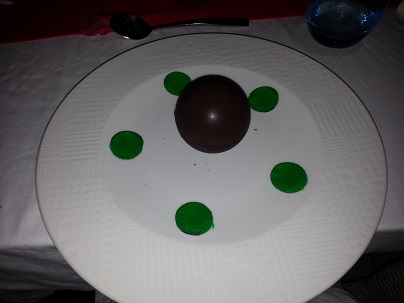 Yes, in the islands of Tahiti. French Polynesia and her islands are known for their cultured black pearls, which of course, you will want to buy. Many shops even allow you to create your own one of a kind piece of jewelry, which I did take advantage of while on Bora Bora. However, before I reached Bora Bora, I was introduced to a very different kind of black pearl. One of the chefs at the Hilton Moorea came up with a dessert named after this pretty gem.

Like the pearls, it is indeed dark, dark because it is made of dark chocolate. If you are anything like myself, the mere mention of chocolate already has you ordering before the waitress can even explain. The best part about this dessert is it comes with a bit of a surprise. Just like when prying open an oyster shell to find that beautiful gem, the black pearl dessert has its own inner gem.

To see a peek at the surprise, check out this short video… Black Pearl at the Hilton Moorea 2014.

Now it’s been a few years since I was at the Hilton Moorea, but reaching out to my contacts with Tahiti Tourisme and the Hilton, we were able to get the hotel to send us over a rendition of what I tried and found so delectable.

Here is the recipe…..

Tempering of the chocolate: melt the two-thirds of the chocolate in a bain-marie or the microwave when the temperature reaches 53°C/55°C
Add the one-third left to lower the temperature at 27°C/28°C, stirring regularly (it takes a few time)
Allow the temperature to 31°C – be careful; the temperature increases very quickly. If it exceeds 32°C, the chocolate won’t have a shiny aspect, and it will give a dull color with whitish marks!
With a brush, line the inside of the 8 molds with the chocolate and store them in a refrigerator to let the chocolate harden. Repeat the operation.
When the chocolate is well hardened, unmold the half spheres carefully and keep them in a cool place.
Place a half-sphere on a platter. Put the popping sugar inside the sphere, the raspberries pieces, and a finger of raspberry sorbet. Close with another half sphere.
Serve the plates and at the last moment, pour the hot raspberry coulis.

Many thanks to Tekura Kelley from Tahiti Tourisme, Erin Wigger, and Virginie Hanot, Hilton Moorea Lagoon Resort & Spa, to help me and pass the recipe on for use in this share.

Passport for Your Palate-Tahitian Vanilla Vodka